We have a new Labor Government and Prime Minister.

Housing affordability received a lot of airtime during the election with the major parties offering up policies which they thought would improve affordability.

Any initiative that helps people own their home is fantastic, however I don’t see this policy solving the affordability problem.

The ultimate solution to housing affordability has to contemplate ways to get more people into the market, as well as introduce more supply.

The way that the Australian housing system is set up, we can’t adjust quickly to increases in demand.

Before you can build a block of land, there are three tiers of Government that have to give a developer the approval to start building the block of land.

Then there is the challenge of getting infrastructure like sewerage, water, electricity and gas to the area. All that needs to be organised before you can actually build the roads and blocks of land themselves.

Not to mention you then have to build a house on the block of land.

It’s an even more complex process when it comes to building a unit. You’ve got the same challenges as above, but a developer will often also have to sell more than half of the units in the project before being able to access the funding required to begin construction.

It’s not an easy fix, but there should be more discussion around how we as a country could more efficiently create supply of new housing.

Where I think we will go in the future is to see more density built around our train stations.

Rail is critical infrastructure that helps us move around. In Australia we don’t use the land around our train stations very efficiently. This is what you see in some of the fastest growing (population wise) areas in Australia today:

Essentially, we have train stations surrounded by vacant land or houses on 400m2 blocks or bigger.

At some point, those areas will surely be allowed the as-of-right (i.e., no approval required) ability to turn a 400m2 block into four 100m2 blocks.

Places like San Francisco, Toronto and Dallas have used similar concepts to transform the way they use their land as a means of providing more affordable housing.

San Francisco has taken it a step further by introducing an as-of-right ability to convert your garage into a self-contained unit or commercial office. Example below: 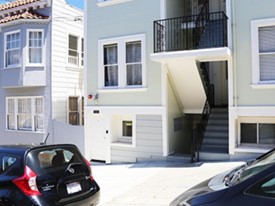 That should be the future for parts of inner-city Sydney where the median house price is approaching $2 million. With the increasing prevalence of ride sharing services, and inevitable introduction of driverless technology, future homeowners may see their garage converted into a self-contained unit that gives them $700 a week in rental income (a good chunk of the interest on their mortgage today).

It’s all future gazing stuff at this point.

The solution to affordability will be density and innovation. In the meantime, I believe those of us who can own the land will be in pole position to help solve the affordability problem and increase our wealth in the process (yes, the two can co-exist).

Essential Tools to get you started

Please enter your details below to gain access to our collection of free tools: