This is how you start something BIG!

If you haven’t heard the name Canva – or of its founder Melanie Perkins – you soon will.

Canva is an Australian born online design and publishing tool similar to Adobe PDF; you can use it to create anything from restaurant menus to business cards to advertisement flyers.

In just eight years the company has grown to have 40 million people using it each month across nearly 200 countries. That’s up from 30 million monthly users this time last year.

Compound growth in action right there!

It was announced this week that Canva raised $275 million from investors and that the company was now worth $55 billion. That makes it more valuable than Telstra and puts Melanie Perkins’ personal wealth (along with her business partner husband Cliff Obrecht) at $16 billion.

At just 34 years of age… and only eight years after the business started! Very impressive.

But it didn’t start that way. In fact, Canva has raised money from investors nearly 10 times – for a total of half a billion dollars – since it started.

Which brings me to this week’s bulletproof tip: 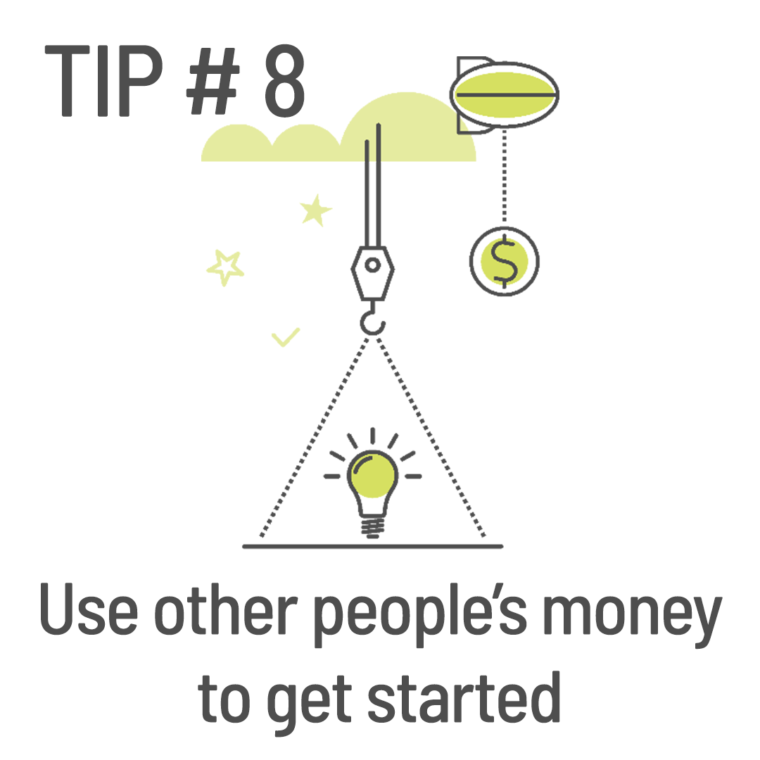 BULLETPROOF TIP: USE OTHER PEOPLE’S MONEY TO GET STARTED.

The longest, most arduous journey starts with the first step. Regardless of age, gender or background, we all have to start somewhere. Access other people’s money to commence your journey and grow your own limited resources from there. This might involve using bank debt to leverage your investment or borrowing from friends or family for a deposit on your first property. It could also mean pooling resources with someone you know and trust but, with that option, make sure the rules of engagement are clearly mapped out and well understood by all parties.

No investor (or business) starts with money.

Therefore, it’s necessary to use someone else’s money when you’re starting out.

To buy my first home I used someone else’s money. Specifically, I used money from a bank, the government, and my uncle.

Most people use bank money – and a bank will typically lend between 80 per cent and 95 per cent of the value of a property. That money has a cost – interest – which is typically between 2 per cent and 3 per cent per annum (of the loan value).

The government gave me another $10,000 as a first homeowner grant, plus a first home buyer stamp duty concession (which saved me another $5,000 in stamp duty that I would otherwise have had to pay, on top of the property price). This money had no cost and didn’t have to be paid back – bonus!

That left roughly $30,000 to pay the balance of the property price, plus some purchase costs.

I would end up paying Uncle John his money back in two years when the property increased in value. The property grew in value by $40,000 in that time, so John’s share of that was $10,000. That worked out to be a 33 per cent return (or cost for me) over the two years.

More expensive than a bank, but as the saying goes, ‘half of one is better than all of none’.

My message is you don’t need a lot of money to get started.

I’m not saying you should do what I did, but for those lucky enough to have family or friends who could help them get started with investing, I would encourage you to ask them for financial help—under tight terms and conditions of course. You will be surprised how open the older generations are to helping younger generations get a start.

I’ve read your book and want to invest. I would like to buy a property but not sure what and where to buy. What do you think?

Having said that, you should be buying land near a capital city that has good cash flow. Growth and cash flow sit on a seesaw/fulcrum, you can’t have one without sacrificing the other. It’s important to get the balance right. If you buy a new house and can get a 4 per cent rent return or higher, you’re generally going to tick the cash flow box. You then need to balance that with the growth, which ultimately comes from population growth supported by jobs and infrastructure.

Hopefully that gives you somewhere to get started. Remember, try and engage with a mentor to help you bounce different options off and give you more specific guidance.

I’m wanting to get started in building my property portfolio. Should I use a trust to buy my properties?

For most people, the answer is going to be no. Trusts are great for protecting assets, however, are expensive to run and don’t typically provide as many tax benefits as property held in an individual’s name.

However, I’ve seen a lot of people use them, particularly self-employed people and people who take on financial risk outside of their property investments.

So, it depends on what end of the spectrum you sit.

Best to speak with an accountant for the complete lists of pros and cons when it comes to your situation. Remember, use an accountant who knows property investment (i.e. owns property themselves) if that’s the path you’re choosing to go down.